Over the years the City of Brantford had relied on a number of industries to provide the industrial base that developed Brantford from a farming community into a blue collar industrial city.  However, prior to the 1980’s, the fuel that fed Brantford’s economic engine was provided by the agriculture implement industry.  This industry, more than any other, provided the well paying and steady employment that allowed Brantford to sustain economic growth.  The workers in this industry obtained constant wage and benefit improvements, through collective bargaining, that would set trends of wage levels throughout the industrial sector of Brantford. The dominance of the agriculture implement industry in Brantford meant that the local economy would expand or contract in step with the cyclical nature of production in the market system.  When economic times were good and production was booming, Brantford’s economy in a whole would be expanding.  When production and employment levels fell, Brantford’s economy would contract.  People would simply wait out the bad times because they knew good times were just around the corner.  This economic cycle was quite successful and allowed Brantford to prosper until the recession of the 1980’s arrived and changed the economic structure of Brantford forever. The combination of stagflation, high interest rates and the recession in the early `80’s threw the agriculture implement industry into turmoil.  Low commodity prices and high debt charges meant that farmers could not afford to but the products that were produced in Brantford and, as a result, first White Farm Equipment and then Massey Ferguson, ceased to exist.  The demise of the agriculture implement industry created an economic nightmare for the City of Brantford.  Brantford’s local economy went into shambles as unemployment exploded into double digits and thousands of workers lost their jobs. Labour, business and government officials began to work together in an effort to develop a plan of action to get the local economy on track.  As a result of numerous meetings and discussions, an economic diversification plan was put into place to encourage companies from various backgrounds to locate in Brantford.  This economic strategy, with the assistance of government grants, proved tobe quite successful as companies took advantage of the generous grants and low land costs to located in Brantford. As the decade of the 1980’s came to an end, Brantford’s local economy appeared to be on the road to prosperity.  No 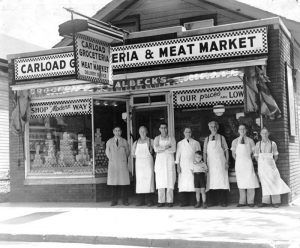 one but the workers, could foresee the impact that the Free Trade Agreement, high interest rates or the high dollar would have on Brantford’s remaining manufacturing sector which was dominated by medium sized multinational enterprises. The “Great Recession” of 1990 – 1992 actually began to take hold on Brantford’s economy during 1989, shortly after the signing of the Free Trade Agreement.  Multinational companies who had established branch plants in the area to serve the Canadian Market began to rationalize their Brantford operations out of existence by transferring production and exploiting the excess capacity of their American and Mexican operations.  Other companies were simply forced out of business by the absence of tariff protection, which is what the Free Trade Agreement represented. That started as a decade of optimism for Brantford’s local economy turned to disaster as plant after plant announced that they were closing their operations throwing thousands of Brantford workers onto the unemployment line. In 1994, due to these economic conditions Brantford’s official unemployment rate stood at nearly 14% with thousands of people relying on social assistance for their existence.  Many of these people, among others, required the use of services which were spread our throughout the city.  It is was proposed that a “Labour Centre” be constructed to centralize these services under one roof. The concept of centralizing services for the workers in our community had been a long time goal of all community partners, like our Labour Council, who are concerned with getting people back to work. The Labour Centre was a unique proposal that was a first for Ontario, if not Canada.  It addressed the short-term need to provide maximum assistance to both employed and unemployed people in our community.

On June 16th, 1993, the following motion was passed unanimously by the executive board of the Brantford & District Labour Council:

“Whereas the Brantford & District Labour Council has not had a permanent home for a number of years and;

“Wheras a Labour Centre in Brantford would be able to provide much needed services to the people of Brantford;
Therefore be it resolved that a task force be established consisting of Brother Garry MacDonald, Brother Dan Webster and Sister Roberta Webster, to explore the feasibility of constructing a Labour Centre to house the present operations of the Brantford and District Labour Council and that this task force be authorized to approach the provincial government for financial assistance to construct such a facility.”

On February 19, 1994, Brantford MPP, Brad Ward, on behalf of the Minister of Economic Development and Trade, the Honourable Frances Lankin announced a $20 million dollar economic aid package to the City of Brantford earmarked to support economic development projects and help create over 200 jobs.
At that time, the province committed $10.5 million of this assistance to the first three projects – The Brantford Labour Centre, the Mohawk Lake Rehabilitation and Park Improvement Project and the Centre for the Conservation of Plastics Resources.  The $20 million commitment to Brantford was part of the $100 million set aside by the New Democratic Government to support economic development and create jobs in six Ontario communities affected by the decision to cancel the provincial government relocation project. Construction of the Labour Centre officially began in September 1994.  As part of our Labour Day Weekend Activities, The Honourable Bob Rae, then Premier of Ontario, visited the construction site and delivered the cheque that would officially close the deal. Construction was completed in March 1995 and the official opening of the Centre was held Tuesday, September 26, 1995.